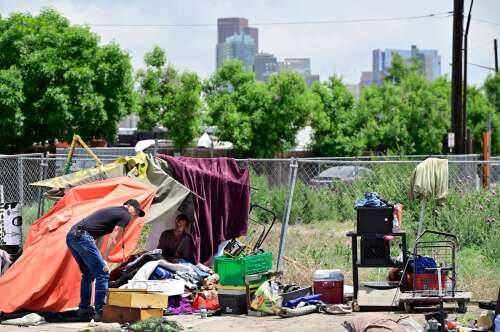 Street Enforcement Team supervisor Scott Lawson, left, talks with a person experiencing homelessness at a campsite near the corner of Umatilla Street and 13th Avenue in Denver on June 9. The Department of Public Safety created the SET in 2021 to address complaints of encampments of people experiencing homelessness. The members of the team are not police officers, but do have authority to hand out tickets for municipal code violations like trespassing, destruction of property and unauthorized camping. (Hyoung Chang/The Denver Post via AP) 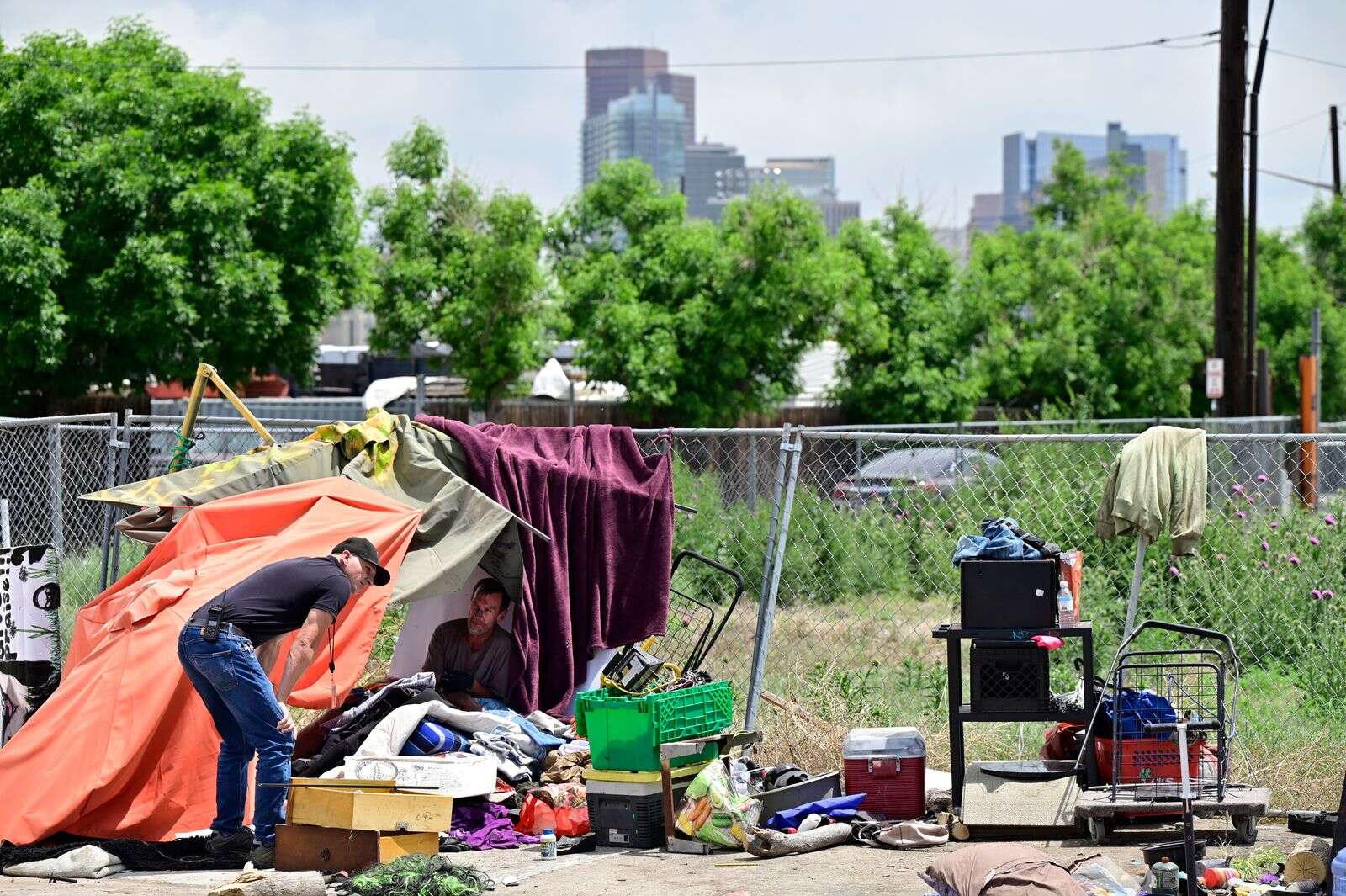 DENVER (AP) – The temperature ticked upward recently as members of Denver’s Street Enforcement Team talked with two men living in tents and under patio umbrellas near a scrap yard just south of the Auraria Campus.

The team, known as SET, had been here before and was looking for a woman who said she wanted them to come back and help her connect to housing services, but she wasn’t home.

Instead, they met a man who said he wanted help, that he was tired of living this way. He just didn’t trust that the member of the Denver Police Department’s Homeless Outreach Team that the SET members called for him wouldn’t run him for warrants, despite the street team members’ assurances the officer would just give him a ride.

“If you want help, we can help,” said Scott Lawson, a SET supervisor.

The Street Enforcement Team is the city’s latest effort to impose its controversial camping ban, which makes it illegal for people to sleep on city streets, parks and sidewalks. For years, service providers, people experiencing homelessness and advocates have said Denver’s camping ban does nothing to help unhoused people and instead punishes them for not having a home.

The goal of the Street Enforcement Team is to remove police from enforcing the camping ban and a limited set of other small municipal violations and free officers up to work on higher-level crimes, said Jeff Holliday, the deputy director of the Department of Public Safety who oversees the program.

The team’s members can devote more time to each stop and talk with the people they’re interacting with and build relationships. The team covers the entire city and some calls can last three or four hours, Lawson said.

Critics of the Street Enforcement Team said it doesn’t matter that its members aren’t police – they still have the same powers to enmesh someone in the criminal legal system. They’re still “targeting folks for surviving in public,” said Terese Howard with Housekeys Action Network Denver. The SET workers also have less oversight than police, Howard said, and do not wear body cameras.

Since it started working in September, the SET hasn’t given out any tickets. That’s mostly because the City Council did not want the team members citing people until they received their uniforms, which have been backlogged since the fall, Holliday said. The team is not involved in encampment sweeps.

The team has had success getting people to comply with its orders to move along voluntarily, Lawson said. Members have contacted people in 2,465 tents and RVs and helped 335 people connect with resources. The team has only had to call in Denver police as backup in one situation, when a team member was assaulted.

Holliday has heard all the criticism of the program. SET workers have been protested by people who oppose the camping ban and the team’s work.

“It’s a complicated conversation,” he said. “The fact of the matter is that unauthorized camping is very clearly not supported by the residents in the city and county of Denver. And they have an expectation that the city enforces that.”

Holliday is also trying to be responsive to the daily complaints about encampments from people and some neighborhood groups. The number of complaints has grown significantly in the last year, department data shows. The tone of calls has also shifted.

But he acknowledged tickets don’t solve a person’s problems and that the threat of a ticket – or a ticket itself – will not motivate some people.

“They hear this from folks, ‘You can write me 100 tickets, write them now. I don’t care, I’m not moving, I’m staying right here,’” Holliday said.

SET workers won’t give out tickets before the person they’re talking to receives a verbal warning, a written warning and a referral to services. If someone at any point accepts services or indicates they may be interested, the threat of a ticket will be dropped.

“Because a citation in and of itself isn’t going to fix the underlying situation,” he said.

A ticket for unauthorized camping carries a maximum penalty of 60 days in jail, though people convicted of the crime could get a probationary sentence, diversion or credit for time already served, Denver City Attorney’s Office spokeswoman Jacqlin Davis said. There is no monetary fine attached to that particular citation, she said.

Some people are motivated by the threat of a ticket for trespassing or unauthorized camping, however, and will move or talk about services available to them, Holliday said.

The ticket starts out as a ticket, but almost always turns into a failure to appear warrant when the person misses their court date, Howard said. That warrant eventually turns into an arrest, which means time in jail. While the person is in jail, there’s a good chance their belongings will be stolen or trashed. Then they get out and start all over, but this time with an arrest on their record that can hinder their access to housing.

Howard, who has been homeless, said the money would be better spent housing people, creating regular trash services for encampments or even further expanding the city’s STAR program, which sends behavioral health clinicians to calls instead of police.

“There are countless very vital lifesaving things that could be happening,” she said.

‘A work in progress’

The members of the SET are not licensed clinicians or social workers. The job requires a high school diploma and “one year of experience in regulation compliance, enforcement, safety, community outreach, customer service or similar experience,” according to a job listing. Holliday said the No. 1 skill he looks for in candidates is the ability to build relationships and a strong sense of empathy. The city is hiring six more people for the team, he said.

The five members currently on the team spend about eight hours a day out on the street. They know many of the people they contact. In their cars – unmarked city vehicles – they keep duct tape, trash bags, cleaning wipes, clothes and socks.

When the officer arrived recently to take the man living near the scrap yard to the Behavioral Health Solutions Center, the man started having second thoughts. He felt rushed, he said, and was worried about leaving his bike frame behind. After 15 minutes of conversation with the SET members, he agreed to get in the car, putting his bike frame in the trunk.

The members of the team were relieved. The man had been making suicidal comments and if he hadn’t agreed to go to the Solutions Center, they would have called in the STAR van or other mental health professionals.

At another encampment tucked between the railroad and Lipan Street, the team looked for a man with serious health problems to make sure he had made it to his medical appointments. He was n’t home when they knocked on his plywood shack, but they talked to a woman living in a trailer on unoccupied private property. They’d talked to her before and Lawson told her she needed to get the trailer off the property by 3 pm She agreed, she just needed to get her friend from her with a truck to come by.

The encampment had been there for months, Lawson said, with a revolving group of residents. They had built relationships with some of the people and are hopeful they’ll be able to help some of them.